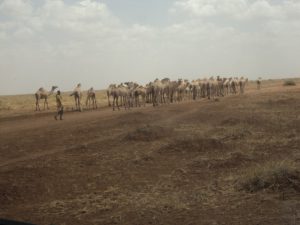 Wajir is a cross border county located in the north eastern region of Kenya. It borders Republic of Ethiopia to the North and Somalia to the East, Mandera County to the North East, Marsabit to the West, Isiolo to the South West and Garrisa to the South. Administratively, the county has eight sub counties namely; Wajir East, Wajir West, Wajir South, Wajir North, Buna, Tarbaj, Eldas and Habaswein all which are within regional stock and livestock marketing routes. The county is classified as ASAL and is within ecological zones V and VI.

Characteristic to Wajir is frequent droughts which are increasing in intensity and magnitude increasing stress and scarcity in pastures and water resources. As a result there is increasing land degradation, inter and intra community conflicts and threatened loss of livelihoods which informed selection of Wajir County as a beneficiary of the RPLRP project. The project intends to build pastoral community resilience by enhancing their livelihoods sources through five components; Natural resources management (NRM), Market Access and trade (MAT), Livelihood Support (LS), Pastoral Risk Management (PRM) and Project Management and Institution Support (PMIS).