Garissa County is one of the three counties in the North Eastern region of Kenya. It covers an area of 44,174.1Km2 and lies between latitude 10 58N and 201S and longitude 380 34E and 410 32E. The county borders the Republic of Somalia to the east, Lamu County to the south, Tana River County to the west, Isiolo County to the North West and Wajir County to the north.

The county is principally a semi-arid area falling within ecological zone V-VI and receives an average rainfall of 275 mm per year.

Given the arid nature of the county, temperatures are generally high throughout the year and range from 200C to 380C. The average temperature is however 360C.

The county is divided into six sub-counties namely Fafi, Garissa, Ijara, Lagdera, Balambala and Dadaab and these correspond to constituencies in the County. the County was targeted because of its Vulnerability to recurrent droughts, Trans-boundary livestock trade routes, clustering around common issues such as pasture reserve areas. Other specific criteria include high Poverty levels,  potential for fodder production and storage, high Levels of denudation, Community interest in the project activities and Complementarity with other projects on drought resilience. 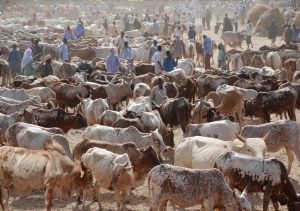 The project is livestock based and will address issues of enhancing pastoral livelihoods resilience. Among other things the project will address problems of water availability for pastoralists, markets for livestock and products, livestock diseases, resource based conflicts and alternative livelihoods. The project was rolled out in December 2015 and officially launched in July 2016. The project will run for five years and it is expected to enhance the communities resilience towards coping with adversities. A number of community projects have been earmarked for implementation. Some have already been initiated while others are in the pipeline.